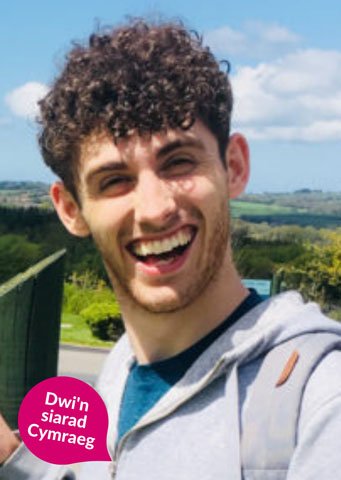 Hi I’m James, one of the Choir Leaders for Only Boys Aloud.

My journey with Aloud started when I was a teenager when a group of singers from Only Men Aloud came to my school, Ysgol Gyfun Rhydywaun, on a recruitment day to introduce boys to Only Boys Aloud. I joined immediately and it has given me experiences and opportunities that I will never forget.

Experiences ranging from rehearsing in my local rugby club Aberdare R.F.C. with friends from the area, to The Ryder Cup opening ceremony, Britain’s Got Talent and performing at the Wales Millennium Centre & The Principality Stadium to name a few. I was fortunate enough to be a part of the OBA Academi as well, where I learnt acting & singing techniques from Tim Rhys-Evans and Jonathan Butterell that I still use to this day. It was a time for me where I really grew as a person and as a performer.

Only Boys Aloud helped me decide what career path I wanted to take and, when I was 18, I left Wales and studied at the Guildford School of Acting on the 3 year Acting course. Since graduating, I’ve been fortunate to work with many companies across the U.K. on diﬀerent projects from theatre to screen.

After a few years in London, I chose to move to Cardiﬀ. I met with Aloud and they asked if I would be interested in becoming a Choir Leader for Only Boys Aloud and I immediately said yes! It’s been an honour to give something back to an organisation that has given me so much. I now use a mixture of the skills and warmups that I was taught as an OBA member alongside those learnt at drama school and in the industry when leading for OBA as a leader.

OBA of course has helped my career hugely but the biggest thing I’ll take away from my time with Aloud is the friendships I’ve made with the boys in the choir when I was a member to the Choir Leaders I now teach alongside. Aloud really does feel like a family, and one that I am proud to be a part of.